As you enter Conwy the castle is dominating the landscape, immediately conveying its sense of strength to the observer. The castle has eight great towers, all of which are intact, these towers are connected by walls forming a rectangle as opposed to the concentric layouts of the other castles in wales which were built by Edward I. 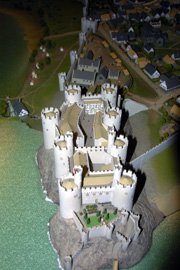 Built between 1283 and 1287 by Edward I, King of England, Conwy was but one link in a chain of mighty new castles commenced during the two military campaigns in which Edward conquered Wales. Its site was chosen to command the important river crossing of the Conwy.

Construction began in March 1283 and, at its height, occupied around 1,500 workmen. within only four building seasons (March-October) castle and town walls were complete, at a cost to the English crown of some £15,000 which is equivalent to £9 million today. All exterior wall surfaces were originally rendered and whitened, creating an effect far more striking than can be seen today. 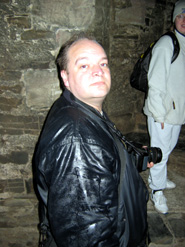 We arrived in North Wales on Saturday the 6th of November 2004, to what only can be described as typical November weather for the United Kingdom, dark clouds and rain. We visited Conwy Castle in the pouring rain getting thoroughly soaked through. Luckily I had some older photos taken in 2002 of this magnificent castle.

Much of the original town wall is well preserved and can be seen today, surrounding the town. In 2019 we actually had the time to walk all the way around the parts that are still usable. 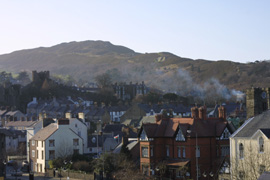 Chimping, before the phrase, was invented 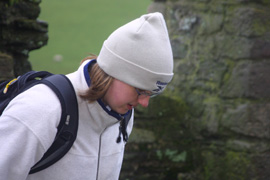 Yes, It’s a long way down

Alternating light and heavy rain meant taking photographs wasn’t easy. It’s at times like this you realise how useful a lens cloth is! 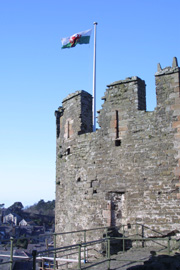 This is the view of the curtain wall as you mount the ramps leading to the entrance to the castle. This shot was taken in 2002. 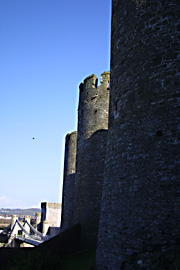 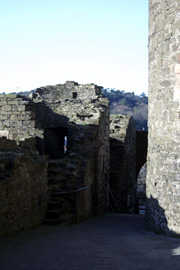 After passing through the visitor center you walk up a gently sloping ramp to the entranceway shown here on the left.

The ground floor still shows today the foundations of many internal buildings. 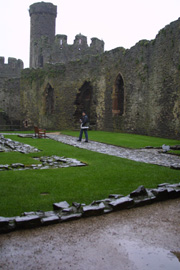 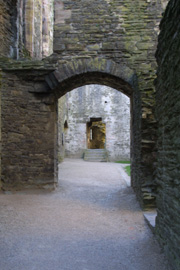 This is a photograph of the ground floor at the East end of the castle, many corridors and rooms can be found at this juncture. 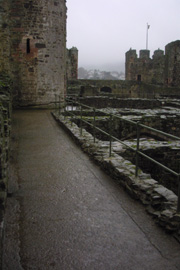 This is a shot taken in 2004 of the upper floors showing the walkways around the castle, warning they are very slippery in rain.

Stood on the outer Ward looking west, with the bow-shaped Great Hall to the left. 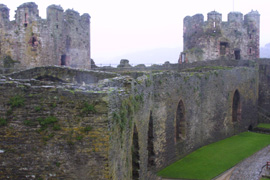 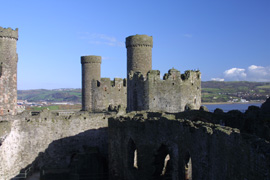 This is just a snapshot taken through a large arrow-slit or very small window from 2002, it just shows off a nice example of a turret as well. 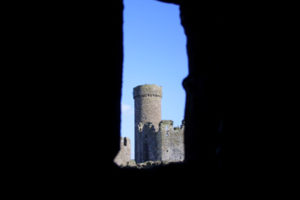 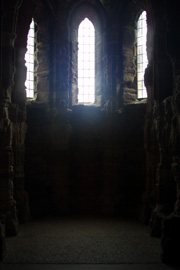 This is in a large hall off one of the towers, I believe it is a pretty little chapel.

This photo shows a great example of the smaller turrets that top the large towers. 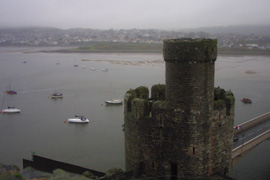 Looking down from the walls we can see a good variety of boats are moored up in the bay.

At the bottom of the picture, you can just make out the inn that is built into an old tower of the town wall. 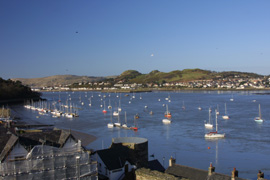 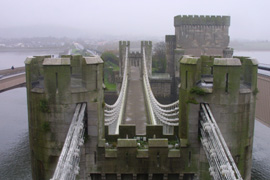 This castellated suspension bridge was built by Thomas Telford in 1826 as part of his plan to carry the turnpike road to Holyhead.

I hope you enjoyed our Road trip report for Conwy Castle. I’ll do a non-castle orientated road trip next time, I promise.